Misogyny: a word much overused

There’s that word again: misogyny. We’ve heard it bounced around many times recently, and this time the heartless misogynists happen to be the Game Show producers from Network Ten’s Family Feud.

The show faced a barrage of social media criticism after one of its questions suggested jobs for women commonly include hairdressing, reception work and domestic duties like washing clothes and doing the dishes.

During an episode broadcast on Wednesday night, host Grant Denyer asked contestants to “name something people think is a woman’s job”, after asking the same about “a man’s job”. Here were the most popular answers: 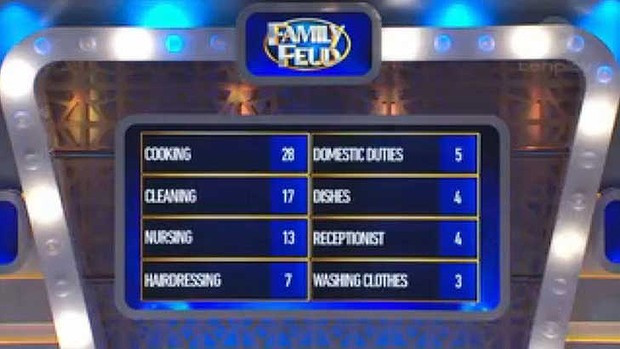 The question initiated an uproar on social media and from some leading commentators, who went as far as to label the question ‘misogynistic.’ The Age was happy to oblige, splashing the ‘misogynistic’ headline over its online pages this morning.

Sure, there’s little doubt the question is stupid, narrow and old fashioned, but is it really a harsh, cruel example of misogyny?

The term misogyny, in its original etymology before the brand was corrupted by a political agenda, essentially means the hatred of women. When I think of the term, I associate groups like the Taliban as misogynists, a group that forced women to disappear from public life completely, doomed to be hidden behind dark walls with no access to healthcare or education, to be kept where only their husbands could see them.

Language is important. As an English teacher, I remember discussing the concept of misogyny to a VCE English class when studying the works of Edgar Allan Poe, deconstructing narratives that feature women having axes pummelled through their heads before being hidden between a houses’ walls. That’s misogyny – hatred of women.

Applying the term to an ill placed family game show question is ridiculous.

But haven’t we collectively grown very used to this term? It was only a short time ago that former Prime Minister Julia Gillard used the floor of our national parliament to slander Tony Abbott as a misogynist. While our now PM might have some paternal instincts when it comes to women, it’s hardly fair to apply the term to a man who has three daughters himself.

What’s happening here is a neat game of semantics playing into the interests of a social and political movement seeking to demonise and overplay any slight indiscretion. Even Macquarie dictionary decided to play ball, updating the term’s meaning so it now essentially serves as a synonym for sexism.

I’m sorry, but sexism and misogyny are different beasts. There’s a difference between harbouring old fashioned and offensive attitudes, and actually hating the other gender.

But hey, language matters. Words and their connotations bring collective meaning to our values and our perspectives. By labelling a minor blemish with a term carrying the weight of history’s worst examples of gender prejudice, Family Feud now stands in the same field as chastity belts and genital mutilation – and isn’t that the point…