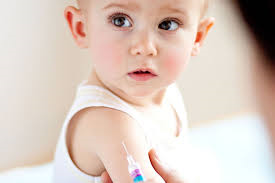 Framing the right to refuse your child vaccination as a human right to freedom is a danger to not only your child, but the community as a whole.

In general, parenting is more than a personal responsibility between the mother-father and child. When parents raise children, they have a social responsibility to ensure that their child grows to become a civil member of society. The way in which they raise their child will have an impact on the wider population, for it is their role to educate and raise someone who will mix with the rest of the community as they grow. The values and ideas passed on from parent to child will add to the fabric of society, for better or worse. Any parent who sees their role as something confined to the immediacy of family is wrong. Their impact on one child will touch many.

Therefore, on a medical front, any parent who paints vaccination as their personal right to choose what’s in the best interests of their child is short sighted and selfish. I might also add: just downright dumb.

Vaccination is not just a personal issue, it’s a community responsibility, largely because of a concept known as “community immunity”. This describes a level of vaccination that prevents epidemics or outbreaks from taking hold and spreading.

Vaccination is a medical miracle, or as some might call it, a magic bullet. It is one of the most important contributions to human health in the past century. It has dramatically reduced the rates of diseases that once scourged populations through centuries. The following graphs, courtesy of the National Centre for Immunisation Research and Surveillance (NCIRS), tell the story: 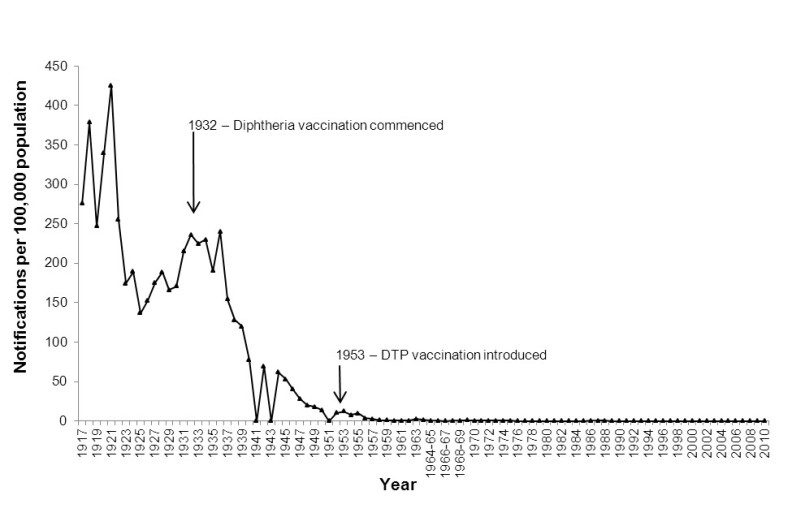 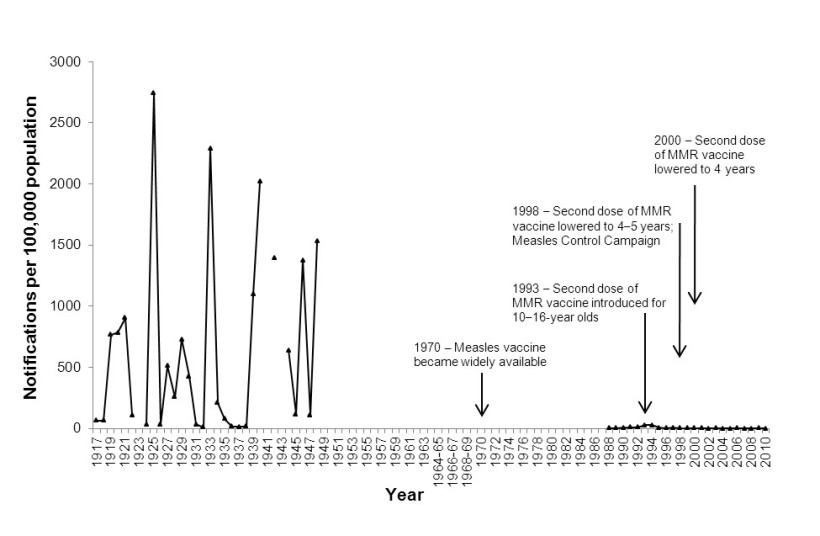 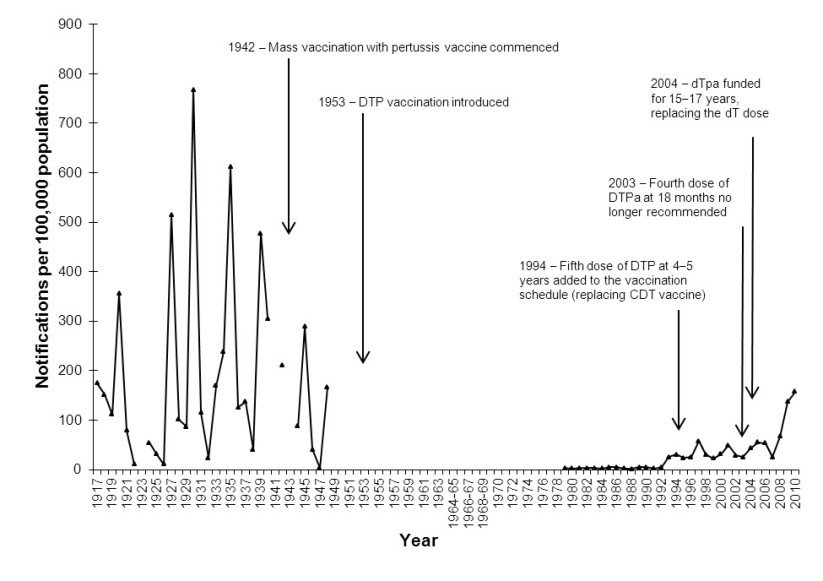 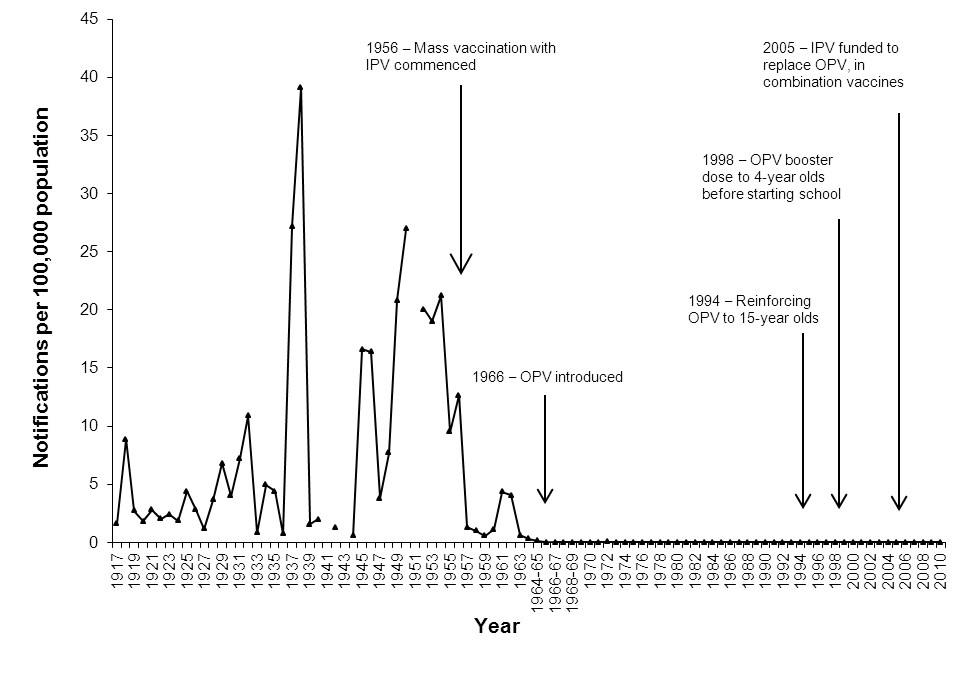 And so on. Needless to say, vaccination has been a wonderful medical advancement here and throughout the world, contributing to a fall in highly infectious diseases. What is worrying though, is that increasing numbers of parents are defying conventional wisdom and turning their back on vaccinations – and thus putting us all in danger. You see, in their minds, Wikipedia and Google forums are more reliable sources than the researched, data based graphs above.

As has been reported recently, the number of Australian babies not fully immunised is now one in 12 and parents registering a conscientious objection has leapt from 4271 in 1999 to more than 30,000. This is a dangerous trend. Professor Ian Frazer, head of the Translational Research Institute, says that falling rates of immunisation will lead to more children dying of diseases like measles, mumps and diphtheria.

Not vaccinating has almost become trendy, with Facebook posts and online discussions sowing seeds of doubt in those who feel they have done the right thing. And what’s most worrying is that the seeds of doubt are mostly being sewn by educated, middle class parents, most of whom get their information from the internet.

This trend flies in the face of reason and it undermines the social responsibility to do what is right for the community. As I stated earlier – it is not a matter of personal choice, but responsibility to everyone. But of course, there’s this line: but if the vaccination is so good and effective, why does it matter if my child is  vaccinated or not because your child should be immune to it anyway? Sigh.

To quote from the Australian Academy of Science:

‘Herd immunity occurs when a significant proportion of individuals within a population are protected against a disease through immunisation. This situation offers indirect protection for people who are still susceptible to the disease, by making it less likely that they will come into contact with someone who is carrying the pathogen. In addition to protecting unvaccinated individuals, herd immunity benefits the small proportion of people who fail to respond adequately to vaccination. In the case of a highly infectious disease such as the measles, more than 95% of the population must be vaccinated to achieve sufficient herd immunity to prevent transmission if the disease recurs.’

Is it any wonder that there has been a recurrence of measles in the past five years?

So the question is, why? Why are parents turning their back on immunisation?

1. They believe there is a direct link between immunisation and autism

This started in 1998, when (former) Dr Andrew Wakefield, suggested that there was a link between the measles mumps rubella (MMR) vaccine, and autism.

It has since been revealed that Wakefield was being paid by lawyers assembling a class action against the manufacturers of MMR, and he was struck by the medical register in 2010 for behaviour described as ‘dishonest, unethical, and callous.’

Numerous studies have proven Wakefield’s claims to be wrong. Even case study evidence provides proof: when Japan withdrew the triple vaccine with single vaccines in 1993, autism rates continued to rise despite the changed approach.

As Queensland Dr Scott Parsons asserts: ‘In the past decade, the surgery I work in has given roughly 30,000 vaccines. I have never seen a serious side-effect that resulted in a permanent disability.’ He adds further: ‘If the outlandish claims about vaccination were true, doctors would simply cease to vaccinate for fear of litigation.’

2. The belief that diseases such as smallpox, measles and polio have disappeared so there’s no need to vaccinate against them anymore.

There’s a reason why they have reduced dramatically, and there’s a reason why they’re on the rise again. Worldwide, more than 150,000 children still die of measles each year. Complacency can be a dangerous thing. It was only some years ago that Australia was declared measles free, and the subsequent drop in immunisation rates since that announcement has seen it reappear again.

3. The belief that vaccinations don’t work

I could just repost the graphs here. Yet to be fair, it is true that vaccination does not equate to instant immunity, but that certainly does not mean that it should not be done. Wearing a seat belt does not guarantee surviving a car crash, yet we do this without thinking. No doctor has ever said that immunisation is infallible, but it decreases one’s risk, and the community’s risk, of infection dramatically.

To draw again from the Australian Academy of Science:

‘All vaccines currently in use in Australia confer high levels of protection that are sufficient to prevent disease in the great majority of vaccinated individuals, and in the wider community. In other countries where the use of vaccination is widespread, there has been a dramatic reduction in the number of people who become ill and die from formerly common and severe infections

For example, the pertussis vaccine prevents disease in 85% of recipients, while the measles vaccine prevents disease in 95% of recipients. The remaining individuals may not be fully protected and remain at least partially susceptible to infection. This may be due to genetic factors, or to the presence of other medical conditions that impair the capacity of the vaccine recipient to mount a protective immune response.’

4. The belief that the reduced rate of infection is due to a higher standard of living rather than immunisation

I read an argument along these lines in a debate about the benefits of vaccination. The woman, Monique, asserted the following:

‘The main advances in combating disease over 200 years have been better food and clean drinking water. Improved sanitation, less overcrowded and better living conditions also contribute. And antibiotics. Common childhood viral diseases had major drops BEFORE the 1940’s when vaccines were introduced.’

Thanks Captain Obvious. Of course improved sanitation, drinking water and general hygiene will help combat disease. This does not mean that we still aren’t susceptible to it.

5. The belief that vaccination is a government conspiracy

There are some people out there who will argue black and blue there are sinister government and pharmaceutical forces at work covering up data about the evils of vaccination. This minority group cannot be talked to, or swayed, even when presented with irrefutable data.

Where does the logic come from? If countless studies have shown that vaccination reduces the occurrence of disease, then what sinister motivation would any government possibly have for encouraging and in some cases legislating for people to get immunised?

If they honestly believe that the opposite occurs, that vaccination leads to greater sickness, I once again can’t understand why any government would wish to clog up its health system, especially in a country like Australia, which is battling a skilled population shortage as it is.

Recently, the Australian Medical Association called for parents who fail to vaccinate their children to face barriers when enrolling them in school and childcare centres. Currently, only NSW requires childcare centres to ask for proof of vaccination when children enrol. The process should be mandatory Australia wide.

Our governments have a duty to legislate to protect the wellbeing of the community. If parents cannot heed to scientific wisdom and demonstrate social responsibility by vaccinating their children for the good of not just the child but the wider population, then the government should step in to ensure that it is done.

Ignorance and misinformation is a dangerous thing. When seeds of doubt and outright denial filter through the national psyche, it can have a devastating impact. Just look to South Africa. Former president Thabo Mbeki was responsive to the arguments of the sceptics that there was no link between HIV and AIDS, and that ARV’s (antiretrovirals) used to treat the disease were toxic. In 2008, researchers at Harvard University put the potential deaths caused by Mbeki’s stance at 300,000. ARVs were made unavailable to patients in state clinics and hospitals, whether they were rape survivors, HIV positive mothers or health care workers who had accidentally been exposed to the virus.

The result of ignorance in the face of scientific reasoning, fostered by a culture of misinformation and denial, can be fatal. In the 21st century, we have the good fortune to be bearing the fruits of thousands of years of medical advancement for the benefit of our lives. For the sake of our children and others, we should not turn our back on it.

For more, check out this entertaining video targeted at those who link vaccinations with autism: