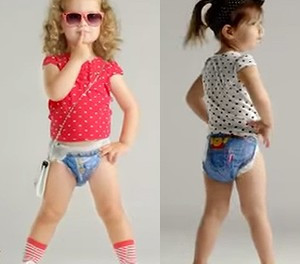 Do these photos look a bit weird? If you quickly glanced at the image while scrolling you would be forgiven for thinking that it was an adult model advertising underwear. No. You’ve just looked at a two year old in a provocative, adult pose advertising  denim nappies. Yes, denim nappies.

Firstly, why is  there a market for denim nappies? Does something a two year old needs to poo in really something that needs to be upgraded so that it’s hip and cool? It’s kinda weird, don’t you think?

The latest Huggies’ campaign is being trialed in Israel, and has been met with mixed reactions. Now I’m not against marketing by any means. I am an unashamed capitalist. And companies are understandably compelled to find a particular niche in order to stay relevant. But is this really necessary for nappies? Does a sanitary product for a toddler really need to be elevated to something fashionable and trendy?

Now, some parent groups have gone so far as to label the images pornographic. This is a massive stretch. They are far from it. Yet what they are is atypical of how a toddler usually behaves. The marketing campaign does not harness behaviour you would expect from a toddler: running around, stumbling, smiling playfully. Instead, it has them posing in front of the camera in a manner more befitting of a Cleo magazine cover.

I mean, look at the images. The girl with trendy sunnies on the left stands with her legs stretched and a designer handbag resting on her waste. And what’s the deal with the finger on the mouth? The girl on the right has her hands on her hips, her backside being the focus of the shot, before glancing coquettishly back at the camera. I suppose the cute part is intended to be that they’re behaving like adults – but do we really want two year olds to be behaving like a model in a shoot?

Is it really appropriate to have two year olds acting years beyond their age to market ‘trendy’ diapers? There’s also the issue that they’ve been slapped up on billboards for all to see. I don’t know if it’s just me, but if I drove past this building size billboard every day I couldn’t help but be a little off put by it. I’d be asking in my head: is this really okay?