There are some things in history we collectively look back on with a shake of the head and wonder how humanity could be so stupid for so long. Strangely enough, the rest of the world watches with dismay at something we already know to be deadly, anachronistic and embarrassing: America’s gun laws.

You know, there are some things that are just so obvious to us now: the injustice of slavery; the ignorance of blindly following the Catholic Church; the evils of fascism and extreme nationalism; the blind discrimination against women in most areas of daily life. Humanity learns collective lessons through time, but sometimes, like a stubborn child, we refuse to learn.

The United States’ obstinacy on gun reform is just like that. A blatant refusal to tackle a cultural problem while the innocent victims’ faces do their monthly rounds on  international broadsheets and tabloids. Their families are left to contemplate the loss of a loved one to a maniac whose society provided the means by which they could initiate a massacre to exact revenge on everyone else for their own misfortune.

Now I’m not American and I don’t profess to know everything about their country. I can only look at this issue from an outsider’s perspective. But no matter which angle I approach it from, I can only end up asking this simple question:

How many more victims? Seriously? 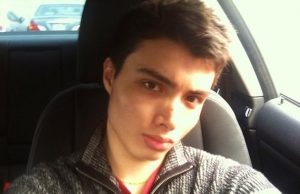 Elliot Rodger’s massacre is just another in a long, tragic list.

Last weekend, six people lost their lives to killer virgin, Elliot Rodger, who packed three pistols and 400 rounds of ammunition into his car before embarking on a spree targeted particularly towards women. The world wakes up to their photographs and we collectively mourn the loss of life for no purpose at all. Yet we can’t help shake the feeling that it’s all too familiar. Another massacre. Another U.S shooting. Last time it was that poor bloke jogging. Before that it was primary school children shot up before a teacher lost her life while bravely shielding her students from the maniac peppering everything in his site like some master over life and death.

What’s most depressing is that every time we awake to this news, we know it’s only a matter of time before it happens again. It happens again and again because too many people hold up a piece of paper like some holy script and spruik the ‘it’s our constitutional right to bear arms’ line. You know, that second amendment in the Bill of Rights that was drafted after American civilians had gloriously defeated their British imperialists by forming militia groups and causing havoc for the red coats from 1775 to 1783.

The context is important here. The right to bear arms is embedded as sacred in the American psyche. Ordinary people exercising their right to defend themselves with guns was one of the pillars upon which a great nation found its independence and self worth. Yet, 239 years after the bill was written, it has lost its relevance. It now serves as a mark of embarrassment to the United States.

I’ll ask the question again – how many more victims?

For conservative groups and special interest lobbyists like the NRA, it doesn’t seem to matter how much blood is spilt. In fact, in this piece by conservative Dustin Hawkins, he asserts that the gun deaths should be put into perspective since there are only ‘roughly 32,000 gun deaths per year in the United States. Of those, around 60% are suicides. About 3% are accidental deaths (less than 1,000). About 34% of deaths (just over 11,000 in both 2010 and 2011) make up the remainder of gun deaths.‘ So because only 34 percent of deaths occur because of gun violence, a tincy wincy 11,000 husbands, women, children, wives, mothers, cousins, uncles, sisters, brothers per year, there’s nothing to worry about? What a relief!

There’s also the NRA’s favourite line: ‘Guns don’t kill people, people kill people.’ Sure, people pull the trigger, but the problem is that it’s so easy for anyone not of sound mind to find a trigger to pull. The false logic behind this often quoted argument is astonishing.  Try it on something else: Cars don’t kill people, people kill people. If we follow this logic, it’s all about the driver so therefore there’s no need for road laws or regulations. The NRA wishes to shut any debate down by shifting the blame from guns to the person, yet they can’t escape the obvious fact that access to assault rifles makes killing a hell of a lot easier for some nutcase wishing to write their name in history for all the wrong reasons.

Then there’s the libertarian argument – that denying people access to semi automatic weapons and assault rifles somehow impedes on their freedom. Yet one only needs to look back to one of the key thinkers on liberalism, John Stuart Mill, to find fallacy in this argument. Mill penned that ‘the only purpose for which power can be rightfully exercised over any member of a civilised community, against his will, is to prevent harm to others.’ So when 900 people have died in mass shootings during the past seven years, and that accounts for only 1 percent of total gun homicides during the same period, it’s evident that there’s a strong harm risk that comes with the current gun laws.

It’s a fair question to ask, isn’t it? Why would anyone, anywhere, need access to a weapon that can spit out deadly bullets by the hundreds in seconds? The only conclusion I can draw is that it’s some sort of fascination; some sort of weird power complex that comes with owning a weapon designed to kill by the hundred. 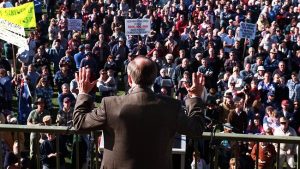 Here in Australia, we had our own gun debate in 1996 and it turned out very differently. Prior, Australia had lax gun control legislation and shared its own frontier history. Yet after Martyn Bryant indiscriminately shot 35 people dead at Port Arthur in 1996, then prime minister John Howard faced down his own constituents in the countryside and ushered in a new set of strict gun regulation. In the time after the legislation was introduced, gun related deaths in Australia fell immediately by 47 percent within five years. It’s a shame that no one significant shares the political will in the United States, despite President Obama’s early rhetoric.

While their politicians fiddle, their society burns. From an outsider’s perspective, it’s beyond comprehension that a proud nation could sit on its hands when more than 32,000 of its own people fall victim to guns every year.

How many more victims will it take?

Who really does the heavy lifting in Australia?