Who really does the heavy lifting in Australia? 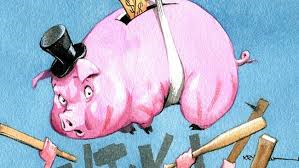 The often quoted myth that low and middle income earners are doing the heavy lifting to fix our budget has been in vogue during the past fortnight – and it could not be further from the truth.

We hear it often: the rich need to pay their fair share! Governments always hurt the little guy. The poor suffer while the rich get off scot-free. We like these lines because they strike a chord with our moral conscience and we see obvious reason why the well off should make sacrifices for those less fortunate – I mean we’re a caring society after all.

Okay, if you’re still reading and have not yet punched your computer screen or reported my blog, let me explain.

According to Australian Bureau of Statistics data, the average Australian household received $2.70 in cash and services for every $1 it paid in tax.

The same data reveals that taking into account social security payments, welfare, public education and public health, only 20 percent of households pay any net tax – the other 80 percent receive their tax back via a range of social programs mentioned (this is also taking into account GST payments).

Note: 61.6 percent of revenue is coming from individuals who earn over $80,000 a year. Yet this is only 19.9 percent of our tax paying population.

This means that the bulk of money funding our services is coming from those in the highest brackets, with people in the lower brackets being the beneficiary. Data from economist Adam Creighton concludes that households in the lowest bracket pay a net tax of -64 percent. This means that comparative to what they put in opposed to what they get back, they receive 64 percent more in return from taxpayer dollars than what they contribute. For the next bracket, households on median incomes, their net tax paid is -22 percent.

As I wrote a couple of weeks ago, a recent study by an independent think-tank found that 48 percent of Australian families pay no net tax once entitlements such as welfare, family tax benefits and childcare rebates are taken into account.

Now sure, there are those wealthy Australians who will dodge tax through a neat network of deductions and clever accountants, but this lot only accounts for a miniscule percentage (less than 0.5 percent) of Australian taxpayers.

There is also the other argument that taxpayers are right to expect that their money be returned to them in the form of services and welfare. A fair point, and that is the essence of taxation anyway. Yet with this is mind, it means that the only people who are paying tax without breaking even are those in the top brackets – the rich who apparently ‘don’t pay their fair share.’ But don’t expect a thank you any time soon.

The fact is that the wealthy pay the majority of tax in Australia, and they fund the entitlements that median to lower income households have grown used to. It’s all very easy and simplistic to say that the rich should pay their fair share, but fact of the matter is, they already do.

Why is being gay such a big deal?