Wow, it’s been a weekend of headline after headline from the ‘progressive’ outlets seemingly obsessed with undermining, embarrassing, and defaming our Prime Minister to suit their own political ends.

People complain about the bias of the Murdoch press, but it really is a sad state of affairs when every headline on the largest meeting of world leaders in history has been focused on embarrassing Tony Abbott by nit picking tiny, insignificant elements of his speeches and finding every possible, desperate angle for attack. The issues of growth, conflict and tackling disease gave way to a national commentary that descended into an asinine obsession with personality.

It started with Abbott’s apparently failed ‘shirtfront’ on Vladimir Putin – where the ABC attempted a pathetic skit of satire aimed at mocking Abbott while seemingly forgetting they were offending the families of people who died on the MH17 flight. Then came Abbott’s supposed ’embarrassing comment that when the first settlers arrived here, Australia was ‘nothing but bush.’ In the context of what he was saying, there was nothing factually incorrect about his statements. From an infrastructure point of view, in which he was talking, Australia was nothing but bush. It should be noted that the world leaders then trotted off to join in a Welcome to Country ceremony to pay their recognition to the country’s first owners, but this didn’t rate a mention over all the faux outrage over Abbott’s comments.

Where next to find the ’embarrassing’ story? It didn’t take long. Abbott was in the firing line again after his supposed ‘cringe worthy’ opening speech when he made a minor comment about each country’s domestic agenda and the difficulties that come with passing difficult reform, to which he then cited his government’s $7 GP co-payment as an example. Never mind that world leaders in discussion also mentioned some of their own policy frustrations at the summit, and never mind the fact that the majority of the speech urged leaders to maintain optimism in the face of challenges occurring in the Middle East and West Africa. Never mind the emphasis on freer trade, growth, and tackling unemployment. Abbott mentioned GP payments – cue outrage.

Meanwhile, radicals outside in the streets of Brisbane were burning Australian flags in protest over indigenous rights. Talk about embarrassing. 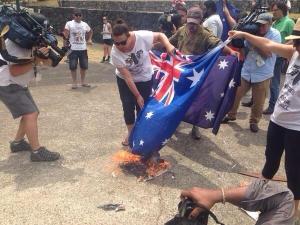 Yep, the headlines keep flooding in, and they all focus on one target- Abbott. Meanwhile, beneath the noise, the leaders did actually do some talking and the following commitments have been made under their Communique:

Did you read about much of that over the weekend? Probably not. You see, Abbott led the G20 meeting, and Abbott is bad, you know. So bad, so every headline must be…bad. Because Abbott is bad. The reports will continue to come flooding in – Abbott embarrasses Australia at the G20. Abbott sends Australia backward. Abbott was bad. Abbott ‘insert negative headline here just cos.’

So what did the US president say? Obama thanked Abbott and said that Australia had been an ‘extraordinary host’. But hey, the headlines will no doubt suggest a huge rift between the leader of the free world and our lowly Prime Minister. 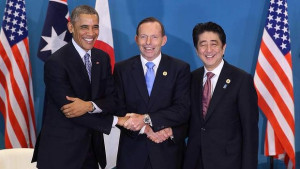 There was a blatant aim by the nation’s progressive class to undermine the G20 at every turn this weekend, and it was nothing short of disgraceful. It was particularly concerning that one of our elected members, Greens Senator Scott Ludlam, had the audacity to mock the meeting of world leaders on our shores, by posting this on his social media account: 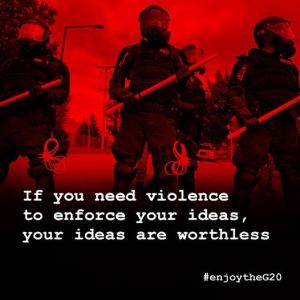 Because I’m sure no security at all would have worked wonders. Now THAT could have been embarrassing. The chattering classes wanted to hijack this weekend and utilise it to promote their pet causes – climate change, equalising wealth distribution, and same-sex marriage rights. Barack Obama was happy to indulge, free from the difficulties of actually taking action on such matters in his own country. Without a doubt, the China-US deal on reducing carbon emissions is laudable and an achievement worthy of celebration, but these headlines were quickly used as a platform for the Left to embarrass Australia by pointing out Abbott’s dissonance on climate change. Perhaps people should look to Obama’s own modest record on climate politics, and before they high five the Chinese for their ‘achievement’, perhaps look at their record over the past decade.

Barack Obama, the charismatic and charming US president, has always been brilliant at the arousing, inspiring speeches, but when one looks at his record as president they could only conclude that he’s done much on seeming, and little on doing. It’s true that in his time as President US carbon emissions have decreased, but that’s more a product of recession rather than any lasting policy achievement. In fairness to Obama, he has faced an obstructionist congress from day one, but Abbott faces the same issues here in the Senate with his budget – but don’t expect much sympathy there.

Here, we had a world leaders meeting where common ground was reached in tackling world disease, freeing up our borders for trade, closing the gender pay gap and promoting economic growth across the world, with a particular eye to easing youth unemployment. But those issues didn’t matter, because Tony Abbott ran the show; and because Tony ran the show, the political left could not see past their own hate to look at the issues that matter.

Fellow Australians, we don’t have to worry about Tony Abbott embarrassing us as a country. We have plenty of people out there going out of their way to do it themselves.

Great work Karl, but who should be taking notice?