Great work Karl, but who should be taking notice?

Karl Stefanovik conducted an interesting experiment this year. He spent the entire year wearing the same suit to expose the double standards of our society. It is a gesture that has rightly been met with universal praise.

It’s an unfortunate truth that intelligent women in our media are judged more on their appearance and style rather than their intellect or talent. As Stefanovik’s co-host, Lisa Wilkinson pointed out last year:

“When you’re a woman doing breakfast TV, you quickly learn the sad truth, that what you wear can sometimes generate a bigger reaction than even any political interview you ever do.”

Of course this is a double standard; and kudos to Karl for pointing this out in a most clever way. Yet who should really be taking notice here?

Of the two genders, which one is more guilty of judging the style, appearance and dress sense of women on television?

While men aren’t innocent in this area, it should be pointed out that women are much more likely to make a sly comment about another woman’s hair, their butt looking big in that dress, or their waist not appearing complimentary in their choice of attire.

I certainly know that in my social circle, the first to criticise the appearance and style of women is not the men, but the women! In most cases, men are too preoccupied to notice. To put it bluntly, they just don’t care. That’s not to say that men aren’t guilty of other instances of sexism, but when it comes to being fashion police, I don’t believe they have a case to answer. 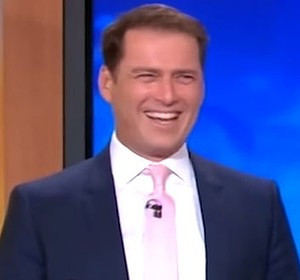 Lisa Wilkinson receives regular and unsolicited fashion appraisals, and while I can’t be certain, the following quips don’t sound like they come from a man: ‘Who the heck is Lisa’s stylist?” one emailer demanded to know. “Today’s outfit is particularly jarring and awful. Get some style.” Said another.

Considering that most men could hardly be bothered noticing even obvious changes in their partner’s appearance, I would say that it’s highly unlikely that many would take the time to write to a breakfast show host criticising them for what they wear.

However, why speculate on the senders, when there’s plenty of proof elsewhere that women are their own biggest critics. Look to Channel 7 host Samantha Armytage. She was recently attacked in the Daily Telegraph for her dress sense while completing casual, day-to-day activities in her own time.

The headline read: ‘Sam Armytage’s fashion fail after cameras stop rolling as Seven may pull pin on Bringing Sexy Back’. The reporter, a woman, Annette Sharp.

Or what about Australia’s most famous feminist, Germaine Greer, on Q&A last year, criticising Julia Gillard for her dress sense? She criticised the then Prime Minister’s choice of jackets before bellowing: “You’ve got a big arse, Julia.’ Interestingly, the loudest laughs to her comments came from a fellow female panellist.

Here was Australia’s most prominent feminist, a woman who has spent her life fighting for women’s rights, criticising our nation’s first female Prime Minister not for her policies, but for her choice of attire.

Or perhaps look to the smorgasbord of women’s magazines featuring sections dedicated to rating prominent women’s fashion choices with coy language designed to mock or appraise. But if you’re not one for reading, tune into the Real Housewives of Melbourne for two minutes to see how judgmental women can be of one another – and this is a high rating show watched by….women.

Karl, your gesture is original and laudable. It does point out the double standards in our society when it comes to the emphasis on appearance and style. Hopefully, many women out there will heed your message, because men are busy not giving a shit.