Last night on Q&A, Matt Colwell, better known by his rapper name ‘360’, caused a stir with his remarks that he identified the Australian flag as a symbol of racism.

“There’s so many racist idiots in this country and they’re everywhere. The Australian flag … I identify that with racism. Anyone else?”

Colwell continued: “On Australia Day you see a bunch of dudes walking around with their tops off and they’ve got an Australian flag around their neck.”

Unsurprisingly, his remarks have been met with a mixed response. One twitter follower bellowed: “Australians have fought & died under our flag. How f**n dare ppl like that 360 puke say it’s a symbol of racism.”

It’s not the first time the Australian flag and its symbolic meaning has been called into question. Only a few weeks ago, a Darwin couple were asked to remove an Australian flag from their front yard due to concerns about its ‘political sensitivity’ in the current climate. 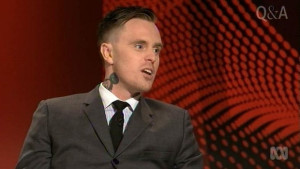 So it’s worth asking the question: why has the Australian flag been linked to racism and intolerance?

The talk first started circling when a mob of locals descended on Cronulla beach in late 2005, draped in jingoistic Australian paraphernalia, to ‘reclaim the beach’ from the perceived threat of outsiders, in response to the bashing of a lifesaver from a group of Lebanese men a week earlier. On that day, the flag served as a uniting symbol for a group of white Australians desperate to fight for a nostalgic view of Australian values. One could argue that on this day, the flag represented a darker underbelly in our culture.

Since then, academics and people like 360 have bemoaned the use of the flag as a rallying symbol for bogans to parade around on Australia Day as they chant against anything not ‘white’, or for when it serves as a back drop to demands that people ‘f…. off’ because ‘we’re full.’

But here’s the thing. The flag itself is not racist, nor is it remotely offensive. A symbol can’t be racist by its very nature, but people can be. In much the same way that our Islamic community implore us not to link Islamic State’s banner of Islam to paint their entire religion as evil, Australians cannot and should not tolerate their flag being called racist if it’s been hijacked by an immature minority.

That’s the nature of symbols. They aren’t inherently racist or offensive, but they can be appropriated to stand for something for which they weren’t intended. The swastika is a case in point. Derived originally as a symbol of auspiciousness and luck in Hindu and Buddhist cultures, and being used by several ancient societies since, the symbol now stands as a dark reminder of Nazism.

What’s forgotten is that the flag still serves as a national banner at cultural and sporting events across the country. It hangs in the backyards of hard working Australians from all walks of life who have grown up identifying it with the best qualities of this country. For many, young and old, the flag embodies the history and the social development of our nation, from early settlers arriving from Great Britain, to the modern, pluralistic nation we are today. The flag has stood through every social, political and cultural change since its inception in 1901.

While it may be used as a cape for hooligans glugging back gallons of beer, in most corners of the country it stands as a peaceful marker of nationhood.

Although, much like language, the nature of symbols means that it will inevitably embody different things to different people. I’d imagine that many Indigenous Australians don’t see the flag as an embodiment of reason and tolerance, and I doubt first generation Australians harbour the same patriotic fervour for the flag as a war veteran might. It would be naïve and ignorant to expect every person here to adore the Union Jack and the Southern Cross – clearly 360 doesn’t.

But by branding the flag as ‘insensitive’ or linking it to racism, we risk negatively marking the millions of peaceful, patriotic Australians who do find something meaningful and worthwhile in the country’s symbol.

A nation is defined as a large group of people who share a common language, culture or history. If it’s no longer politically correct to fly the nation’s flag, we should rightly ask ourselves – are we even a nation at all?