So if you’ve followed the commentary on the budget over the past few months you would be forgiven for thinking that our Prime Minister was the enemy of public education, health and welfare. You would understand the narrative that Tony Abbott is the slash and burn Prime Minister, the heartless conservative who ripped billions out of the sectors that cater for the most needy. The conventional view is that he is the cruel, heartless, unfair Prime Minister.

Okay, so you think I’m lying. So let’s check the facts. First, here is the budget projections for education spending over the next four years:

The fact is that under the Abbott government, Commonwealth education spending will actually rise from $13.2 Billion in 2013-14 to $18.1 Billion in 2017-18. This represents an increase of 37.2 percent over four years.

The Labor Party and its sympathetic commentators fed the deception that the government is cutting $30 Billion from schools. This deception is fed by a technicality. See, the former government promised extra money to be delivered into the system in the never-never – during 2019-20 – far beyond the scope for treasury to provide solid economic figures or for the former government to actually fulfil that promise. It’s very easy to promise money years into the future, and then attack your opponents when they logically conclude that it’s too early to commit to such a sum.

Budget Paper No. 3 shows the following increases in public hospital funding over the forward estimates to 2017-18:

Or let’s look directly to the budget papers: 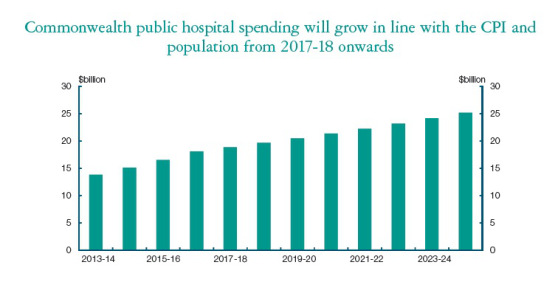 According to budget projections, healthcare spending will continue to rise. Yet once again, because the former government made promises for funding beyond any years that they would be held accountable for such funding, the narrative about the nasty Abbott government takes hold.

The fact is that under Abbott and treasurer Hockey, funding for health and education is currently at record levels.

Yet the biggest surprise is in welfare, where spending is expected to increase by a whopping 16 percent from $145.8 Billion currently, to $169.6 Billion in 2018. Under Abbott, welfare spending will climb by nearly $24 Billion in less than four years….

As you can see from the above graph, welfare spending far outweighs any increase in any other sector. In fact, the chart shows that the order of spending increases numbers welfare first, healthcare second, defence third, and education fourth. The real cuts in the budget are coming from other areas.

For all the talk about cuts, the truth is that Australia’s level of government spending is currently at record levels, even after taking factors like inflation into account. To quote from Trading Economics:

Even relative to government spending as a percentage of Australia’s total economy (Gross Domestic Product), Abbott currently ranks, and is projected to rank, as one of the highest spending Prime Ministers of the past fifty years. Note the graph below, which shows government spending currently above 26 percent of GDP, significantly higher than at any time during the Howard years and even slightly above Rudd-Gillard at the height of their spending spree. 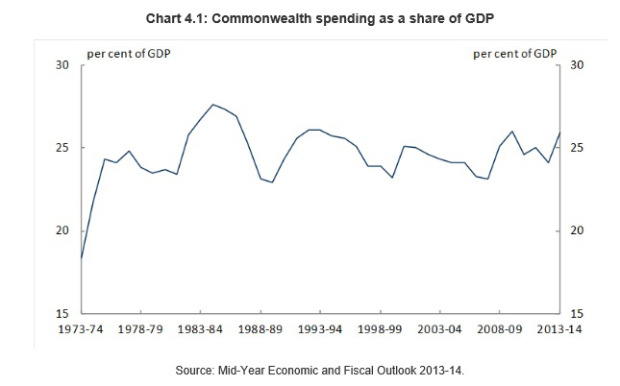 It’s amazing what a little bit of fact checking can do. If you believe the hysteria of protestors on the street and from some commentary in the media, you’d think the government was a tyrannical pack of ideologues slashing government spending to the bone.

Yet when you look at the actual figures and do a little bit of homework beneath all the noise, you learn an odd truth: Tony Abbott is one of the biggest spenders of them all.

100 years since WW1, peace is threatened not by countries, but from what is hidden in the shadows

Robin Williams – a troubled life that touched us all