The age of entitlement is over, almost… 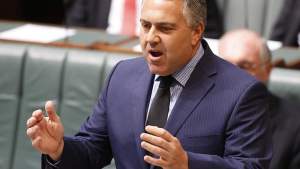 Say what you will about Joe Hockey and the Abbott government, Australia must set itself on a sustainable fiscal path for the future. It is just a shame that the government has not gone far enough.

First of all, let’s cut through some untruths that have emanated from the budget debate for weeks. The first untruth, or exaggeration at least, is the government’s own rhetoric that Australia is in some sort of budget crisis. Sure, weak productivity growth, falling terms of trade and an ageing population mean we can no longer expect governments to keep us in the style to which we have become accustomed, but there is certainly no crisis at this stage. The government’s use of the term ‘crisis’ is classic politics. Overplaying the situation so as to cushion the voters and make tough reforms acceptable.

However, the other untruth, or perhaps better termed ‘complacency’, comes from those who claim that Australia has got no budget problem at all. The people from this camp love their comparisons with other countries. Australia’s debt level as a percentage of GDP is lower than any other OECD country in the world. Yes, we’ve heard it many times, and yes, it is true that comparative to other countries Australia is rather neatly perched. Yet the misleading part is when people use this point as a basis to claim that we should adopt a business-as-usual approach to government spending.

One can only shake their head at people who attack the government using the ‘look at those other countries’ line. Did they forget that these countries are still recovering from the worst recession since the Great Depression? We are hardly giving ourselves a good measuring stick. ‘Well, we’re doing better than all the other countries in crisis. So we must be doing great. Carry on.’ It’s like playing in the lowest division for your given sport and believing that you’re a champion because you’re blowing the competition away – sooner or later arrogance will get the better of you and reality will kick in.

While the government might be reaching when it tells us that the budget is in crisis, it is certainly not wrong when it claims that if there is no game-changer in the short to medium term then we certainly will be in crisis. Look at the situation: we have a falling revenue base married to an ageing population. Soon, as the baby boomers hit retirement, over 30 percent of our population will be over the retirement age. If you’re wondering why the government wants people to work until 70, this is it.

Hockey is right to assert that Australia must build towards a sustainable budget future. We cannot just kick back and enjoy borrowed wealth for the next ten years. We’re already heading towards paying $16 Billion in debt interest repayments per year – imagine the infrastructure you could build with that!

He talks about the age of entitlement, and it is a rather fitting name for the psyche of many – from lower income to higher income – we assume we are entitled to welfare, handouts, subsidies, concessions – all paid for by someone else. I personally worry about a society that asks more about what government is doing for them before asking about what they are doing for themselves.

Right now, 48 percent of Australian families receive more in government welfare than they contribute in net tax. More than 6 million Australians now live off government benefits or salaries – with only another 6 million Australians working full time in the private sector to pay for them. When Hockey talks about ‘lifters and leaners’, he is referring to the economic reality that there are the creators of wealth (the entrepreneurs and private businesses) and the consumers of wealth (welfare recipients and public service employees). No one is saying that the public service does not contribute valuably to the economy (as a teacher I’m said public service employee), but if the taxpayer is funding it we need to make sure that it’s worthwhile and efficient.

Market Forces and Environment Victoria have just updated figures based largely on the Treasury’s Tax Expenditure Statement. It shows that over the next four years, Australian taxpayers are set to spend over $40 billion on programs that encourage fossil fuel production and consumption, these include the mining industry’s fuel tax discount. I’m certainly not anti-big business, and I understand the fuel cut is defended on the premise that it’s a work based cost (in much the same way individual taxpayers claim work expenses) but seriously, asking Australian families to take a hit while subsidising a booming industry hardly makes for good politics.

The government would also do well do abolish other tax breaks such as negative gearing – a break that is losing the government billions in revenue and squeezing first homebuyers out of the market. Other middle-upper class entitlements such as the private health insurance rebate should also be wound back. It’s a tad hard sell the need for $7 GP visits and $5 co-payments for PBS prescription medicine while maintaining generous rebates for those who can afford health insurance. On the education front, the government should consider winding back federal funding to independent schools. If we are talking about ending the age of entitlement, then it needs to be done across the board.

Just on health and education, you will hear commentary over the coming weeks about the government ‘cutting’ health and education funding, but be careful. A cut implies that money is being taken out of the current system – this is not true. The government has committed to the Gonski funding for schools up until 2017, after that federal funding will be indexed to the CPI (Consumer Price Index – hence, funding will increase relative to inflation). The problem with the Gonski funding was that it was backdated so the main injection of money would not come in until 2018 – yet no government can commit to solid funding over the forward estimates in the budget (which is four years), so any ‘commitment’ to funding is here-say only. Likewise, on health, money is not being taken out of the current system, but funding is being brought in line with the CPI. So is money being taken out of the system as it stands? No. Is the government slowing down the injection of funds that could flow into the system? Yes.

This slowdown of funding to state schools and health services will potentially put the federal government at loggerheads with the states – but perhaps there’s a method here. If the states start campaigning for more money, this will give Abbott and Hockey fertile ground to start the early talk about the need to increase the GST – since GST revenue flows directly to the states. The mere suggestion could be political suicide, but when one looks into the idea, it actually has some merit.

Both sides of politics have decreased Australia’s income tax base over the years, and the downside of any income tax is that corporations and high flyers with clever accountants and neat ‘donations’ networks always seem to find loopholes to avoid paying their fair share. It’s concerning to know that 75 ultra-high earning Australians paid no tax at all in recent years. Yet the good thing about a consumption tax like the GST is that you can’t avoid paying it.

However at this stage the government does not want to touch it. Instead it has sought substitutes such as the increase in fuel excise and the temporary deficit levy on high income earners. Both tax hikes have hurt the government politically and have done little to create a sustainable revenue base. It’s a shame that they have chosen to fiddle around rather than initiate a much needed economic debate sooner.

So what to make of the budget? After all the rhetoric it turns out that the age of entitlement isn’t quite over; it’s just been watered down a little bit.